The First women of India – who made History 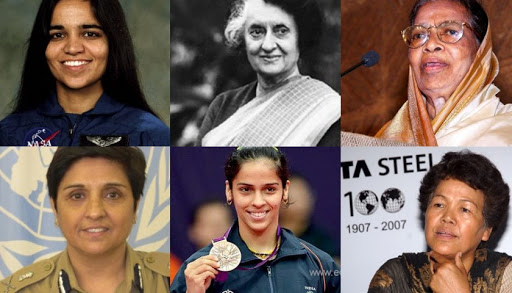 In every aspect of life, every single woman is simply great and amazing the way she is but here we will discuss the women who have created history. Every single Indian is proud of them, they are no doubt the pride of the nation. Lets discuss-The The First women of India who made history.

Born In-1927 in Niranam.
First woman IAS officer of India.
A girl who made everyone proud, Anna Malhotra when went for her IAS interview she was suggested that she should join either IFS or other services instead of IAS.

Interview Panel was of the opinion she will have to a stumbling block in her career as an IAS. But yes, she made it happen.

Born on-June 1949 in Amritsar, Punjab.
There is absolutely no one who does not know about this lady. A true Singham.Kiran Bedi- the first IPS officer of India.

There is an endless number of great work she did in her career. When I had watched her documentary I was completely speechless.

Bachendri Pal-
Born on-24 May 1954 in Uttarkashi.
She is the first Indan woman and fifth in the world who did outstanding work by climbing the world’s highest peak that is Mount Everest.

Recently in 2019, she is been awarded the Padma Shree for her distinguished achievement.

Justice C.M.Fathima Beevi-
Born in the year-1927 (Pathanamthitha town).
The first woman who became successful to get the gold medal when she cleared the Bar Council Examination further she became the 1st female Supreme court judge.

After her graduation, it was her dad who believed in her and wanted her daughter should study law and so she started her career in the judiciary. After retirement, she has been a member of the Human rights commission and she was also the former governor of Tamilnadu state.

Marry Kom-
Born in the year 1983 (Manipur).
Marry Kom-The Magnificent Marry Kom, who became the first Indian woman who won a bronze medal in Olympics for her great achievement in her field she is awarded by many Great awards like-Padma Bhushan, Padma vibhushan, Rajiv Gandhi Khel Ratna award and many more.

Mari Kom is also the first woman boxer to who won gold in the commonwealth games and secondly she has changed the history of sports by winning the world boxing championship six times.

In Asian games, she has also won the gold medal and she is the first Indian boxer to win it.

Sania Mirza-
Sania is the first Indian woman who won WTA in the year 2005 and is also the one who ranked number one in the WTA’s Double.

Sania mirza is among the highest-paid athlete of India. In the field of tennis, she has done excellent and eminent work. In her career as a professional tennis player, she has won six grand slam titles.

She is renowned for being the first full-time female Defence Minister of India.

These women have made India proud in a true sense. They made showed through their work that, every woman is equally competent with a man. They have shown that if they can, so can others.

So, empower the woman to achieve what she wants. Let do what she wants to. You never know she might be the next to make the History.

You would also like our other blogs:
Stop Thinking And Start Living-What I Learned From The Book
How TO Become Self-Dependent